By accepting you will be accessing a service provided by a third-party external to https://www.rescueproinc.com/ 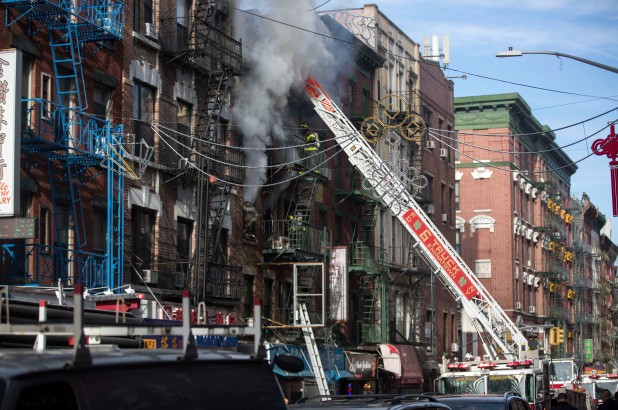 I recently read an article about how you shouldn't rest the aerial on a build due to many different factors... I have to totally disagree with this commentary.

One of the factors of concern was failing the framework of the actual aerial, and another concern was potentially causing the parapet wall to collapse. While I guess this could be a possible concern, lets address what is really important, the safety of the firefighter who is climbing the ladder to get to their position.

Every day in the City of New York, the most vertical city in the world, the ladder company chauffeur's responsibility is to put the aerial up, (based on bldg. type) typically to the roof to allow for the Roofman to get to their position. This is typically the fastest and most direct way to get to the roof of the fire bldg. or the exposure. It also allows for a point of egress should conditions require you to evacuate the roof.

I remember the first roof job I had as a proby in Ladder 6 in Chinatown. It was early in the morning maybe 3 or 4 am, the tiller was on the sidewalk because the street was narrow and a double parked car, and the ladder was nearly vertical. I remember the Chauffeur, Mickey Meldrum apologizing to me, and then saying, "get up there, it's not going to carry you up there!", and so I started climbing. Passing through the smoke on 4 I knew I was only about half way up there... it sucked! Climbing in smoke carrying the rope through another 40'-50'. Oh and there was no time to stop and put your face piece on... you just held your breath and kept moving. The only saving grace was that the ladder was solid.

Having that experience and having climbed many aerials since as a Roofman, I can tell you that you know who the experienced chauffeur's are based on how the aerial is in place. The worst thing is when as you are climbing carrying a saw, or a rope, and your hand tools, having the aerial bounce up and down and even sway. I've actually seen a Chief order a Roofman to stop climbing the aerial and climb back down, because you could see how uneasy he was climbing the aerial.

Allowing for the aerial to lightly rest on the parapet makes the aerial much more stable. It closes the gap when the firefighter is transitioning from the aerial to the roof and vise versa... It takes away the bounce and allows you to climb the ladder like a set of stairs vs. running in a bounce house. Please don't confuse what i am saying about resting the aerial on the parapet vs. driving it into the parapet which shouldn't be done. There is a difference!

While I know this post will upset someone out in the perfect firefighter world, or piss off the safety police, but in reality for the guy climbing the aerial to get to their position, allow the aerial to come in contact with, or rest on, the parapet wall for his safety, he'll thank you later.